Compulsory: To Be Sent To Us By Post, Email Or Deposit 72 Hours Prior To The Commencement Of The Tour. 02 Nos. Passport Size Photos, Photocopies Of Photo Identity Proof Of All MembersExample : Ration Card, Passport, Voter Card, School I Card For Children Etc.. Aadhaar & Pan Card Is Not Acceptable.IF YOU WILL NOT SEND DOCUS IN UNDER DECIDED TIME THEN WE WILL NOT RESPONSIBLE FOR THAT SIGHT SEEN TSOMGO LAKE & BABA MANDIR To Be Carried Original document with us (Husband, Wife, Adult, Children Etc).

Early morning tour to Tiger Hills (at around 4am) to view sunrise over Kanchenjunga Peak (Subject to clear weather) on your way back visit Batasia Loop & Ghoom Monastery.

After breakfast, transfer to IXB Airport (110 kms / 04hrs) for your onward connection.

Places to Visit in Darjeeling 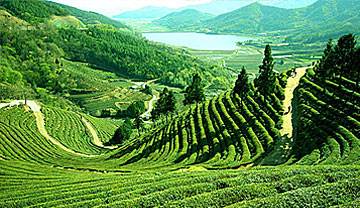 Gangtok is a famous hill station in the north --eastern part of India. Gangtok has the largest hospitality industry as the basis of Sikkim tourism and is the capital of the state. Hence, the hospitality of this hill station is something to really look forward to. Just for enjoying the hospitality alone, many people pay a visit to this state almost every year. Thus, it can be clearly understood that apart from having hills, mountains, scenic, and natural beauty, Gangtok is also famous for its hospitality. 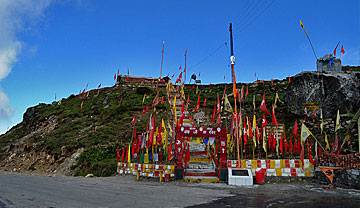 Further 10kms from Tsongo Lake on the way to Nathu-la - Jelepla pass lays the legendary Baba Mandir at an altitude of over 13,000 feet. It was built in memory of a soldier in the 23rd Punjab Regiment, who drowned in a stream near the spot. Legend says he later appeared in a dream to one of his colleagues where he requested that a temple be built in his memory. The road to Nathu La passes the lake on north side. The Chinese border crossing is only some 5 kilometres (3.1 mi) east-northeast in a straight line, but some 18 kilometres (11 mi) by road. 56 km from Gangtok is the Nathula Pass at an altitude of 14450 ft, bordering between India and China in the Tibetan Plateau. It is one of the highest motorable roads and is richly covered by many varieties of alpine flora and fauna. It is most tranquil place to visit. At present domestic tourist are given permit to visit Nathula 4 days a week (Wednesday, Thursday, Saturday & Sunday) and only 30 vehicles are allowed each day.

Nathula Pass used to be a main gateway for Sikkim -Tibet Trade (also known as SILK ROUTE) until it was called off in 1961. Shortly later China and India fought a bitter war and trade never resumed. Till then, China had a trade office in Kalimpong, a People's Bank of China in Kolkata and also a consulate there.

Thanks to the Prime Minister's China Visit, the announcement of Resumption of Indo-Tibet trade through Nathula was made official on 23rd June 2003. With declaration of trade, tourism will not be far behind.

A Pilgrimage tour to Tibet via Sikkim will be one of the most fulfilling experiences whether it is Lhasa (Roof of the world) or Manasarover Lake (Spiritual freedom). Kalimpong is hill station in the Mahabharat Range (or lesser Himalaya ) in the Indian state of west Bengal . it is located at an average elevation of 1,250 metres(4,101 ft). Thw town is the headquarters of the kalimpong subdivision . a p[art of the district of Darjeeling .The Indian Army's 27 mountain Division is located on the outskirts of the town. Kanchenjunga Falls Situated at a distance of 25 km from Pelling, the Kanchenjunga Falls is a perennial waterfall and takes about an hour to reach. There are small steps which lead to the base of the water fall.

Darjeeling Himalayan Railway (DHR), popularly known as the 'Toy Train' is one of the main attractions of the region. The track on which the train runs is only 600 millimeters wide. The size of the train is commensurate giving it the name `Toy Train`. Narrow Gauge trains are used in parts of India to travel to hill stations. The total area of the Narrow Gauge in India is about 4500 kilometers. Arguably, the most magnificent train journeys through the narrow gauge are the 88 kilometers through the gorgeous terrain to Darjeeling from Siliguri. UNESCO has declared the DHR as a World Heritage Site.

Trekking in the Darjeeling Hills began almost a century ago. In fact, the first organised trekking route in India was setup here along the Sangalila range. The trek begins in Darjeeling and proceeds through Maneybhanjyang, Tonglu, Sandakphu and ends in Phalut.
There are trekker huts under the management of Darjeeling Gorkha Hill Council Tourism Department all along the route to Sandakphu. For further information contact, Delhi Tour n Travels Head Office, Delhi.

The White Water Rafting on the river Teesta & Rangeet (Triveni), the scenic beauty of the banks, surrounding hills, its flora & fauna and sighting of several varieties of fishes is simply enchanting. A river trip is often an adventure. An amateur with a little sense of adventure can equally enjoy it.

Eastern India is home to more than 850 species of birds and is considered as being the richest birding area in the country. The abrupt juxtaposition of many different biotopes or life zones ? ranging from almost plains level to over 6000m, and from tropical heat to arctic cold, has given to the Eastern Himalayas a flora and fauna that for richness and variety is perhaps unequalled in the world. Sheltered in the rain-shadow lie dry practically rainless valleys adds to the ecological complexities of the jumbled habitats and make the area rich in birds, plant and insect life.


So now book a holiday of your dreams !!

Darjeeling has been a city in the state of West Bengal in India and has been a renowned tourist destination owing to high mountain peaks, UNESCO world heritage site, extensive tea ranches and finally unique set of Darjeeling Himalayan railway trains. There was established the British sanatorium in 1860s in Darjeeling for treating soldiers who were wounded in 1857 revolt and hence for stimulating mind and body, teas were planted in the farms. Consequently, there appear several British hospitals and schools where the style of imparting education is still dominated by British manner and hence students from all over India and abroad are keen to seek admission in such institutions.

While for general tourists, the place of Darjeeling has been full of interesting sites and other monuments, such as mountain peaks, monasteries and shrines, museums, tea farms, botanical gardens, art galleries, waterfalls and much more. However, no account on Darjeeling is complete without the elaborate reference to its grand and popular tea estates. Such estates are owned by leading tea companies such as Tata, Lipton and others and tea leaves are collected and processed at same location. Let us discuss them in details:

It is almost 11 km away from Darjeeling and presents an exotic view of Himalayan mountain ranges and Kanchenjunga. It has a towering height of 2600 meters. Photographers visit the place to catch the sight of rising sun through the mountain crossings.

It has been a large zoo which houses hundreds of animals and birds, such as wild wolves, red pandas, Siberian tigers and snow leopards. Besides, several types of birds are found here as well. It is named after the first governor of independent India, Mr Padmaja Naidu and was setup in 1958.

TIt is a special train which plies between Jalpaiguri and Darjeeling and hence, visitors can see the breathtaking views of mountain ranges while on way. Moreover, since it generally travels at a speed of as low as 10 km/ hour, hence the train travel is a game to children who have jump off and re-board frequently.

Gangtok has been the capital city of the state of Sikkim and the place has become immensely popular the world over, for its Enchey Monastery which was built in 1840. Gangtok attracts the largest number of tourists annually and hence tourism has prospered a lot in Sikkim in recent years and hence majority of the people in Gangtok have either been directly or indirectly associated with hospitality industry

The main tourist attractions in Gangtok are mentioned below:

Constituted amid lush green vegetation, it has been the popular tourist destination which is stretched till 2 acres. Besides, it is located just near to Ranka Monastery and there also exists a giant rectangular park which has the profound impression of shamanism. In this park, there are constituted regional idols and an artful sculpture has been crafted out there.

This is a place which is considered to be the palace a couple of centuries back, from where the king of earlier Sikkim kingdom used to rule . Moreover, it is close to the famous Pemayangste monastery and has also been a renowned archeological site as well.

Therefore, for having well-planned India tours, one needs to focus on several aspects of tours such as airline or railway booking, hotel reservation, car rentals for airport pickup and sightseeing and to arrange for visits to several local interesting spots and to regulate the funds transfer and official cash delivery at the time of arrival. Thus, at this juncture, we feel elated to state that we have been the earnest travel agents in New Delhi by the title Delhi Travels N Tours. We have been in the profession for the past 20 years now and hence have been well experienced in organizing such thrilling trips